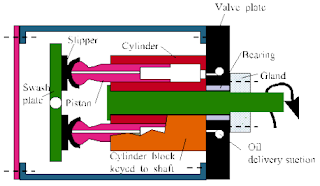 This pump is sometimes called the variable stroke gear pump (V.S.G), it runs in the flooded condition, the make up tank being above the level of the pump so that all the working parts are immersed in oil. It is driven by a constant speed electric motor the volume and direction of the oil flow being controlled by means of a stroke control lever. 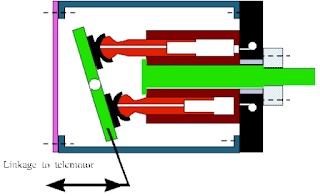 The VSG pump is stated to have some advantages over the Hele-Shaw , this is due to the fact that the c of g of the Hele Shaw plungers is a relatively large distance from the centre of rotation operating relatively large centrifugal forces . The VSG plunges have a c of g close to the centre of rotation creating relatively small centrifugal forces, this means that the VSG system can be run at much higher speeds and therefore can be much smaller whilst doing the same work as the Hele-Shaw. Due to centrifugal forces acting, the wear on the V.S.G. pump pistons can be greater than that for the radial type pistons There is a small clearance between the valve and cylinder blocks when running off load. When the unit comes on stroke the hydraulic pressure forces the two faces together.
External pipes connect ports to steering gear.
VSG pumps and Hele-Shaw pumps have an odd number of cylinders since calculation shows that this gives better hydrodynamic balancing (and a better starting torque when used in a pump driving hydraulic motor).