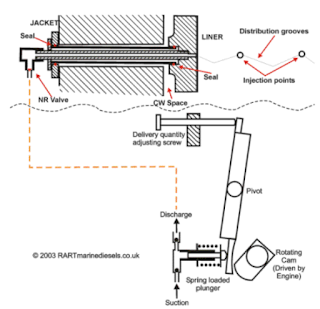 The cylinder lubricator pump block consists of a series of small engine driven positive displacement pumps. A rotating shaft with cams mounted on it push pivoted levers against a series of spring loaded plungers which pump cylinder oil to the lubricating quills via suction and delivery valves. The stroke of the pump ( and thus the quantity of oil delivered) is adjusted by means of a screw which moves the pivoted lever closer or further away from the driving cam. In the example shown, screwing the adjusting screw inwards would reduce the quantity of oil delivered per stroke.
Oil is discharged from each pump to the cylinder lubricating quills which are situated either towards the top or the bottom of the liner. The quills are arranged circumferentially around the liner, and locate in drillings in the liner wall. On the design illustrated the quill is of the type which passes through the cylinder cooling water space and so the quill passes through a sealing tube  as shown. This prevents oil contaminating the CW space or water entering the liner.
Correct cylinder lubrication achieves three main objectives: It forms a lubricating film between liner and rings, reducing wear and helping produce a gas tight seal; Due to its alkaline additives it protects the liner from acid attack (cold corrosion) and the detergent and dispersant additives help maintain the ring grooves in a clean condition, preventing carbon build up and ring jamming.
If the the lubricating oil is not supplied in sufficient quantity as per manufacturers instructions (0.7 - 1.3g/kwh depending on engine type), then liner wear rate will increase due to microsiezure and acid attack. Ring grooves may also coke up leading to broken rings. Using a cylinder oil with too low a BN (alkalinity) may lead to cloverleafing and blowby. An inspection of rings and liner can be done by viewing through the scavenge space. This will show up defects previously mentioned. Liner gauging carried out during overhaul will establish whether the wear rate is acceptable (0.05mm/1000hrs).