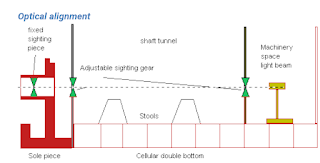 Optical Alignment
At the for'd end of the engine room a light box emitting light through a pin hole is fixed from the design height of the crankshaft. 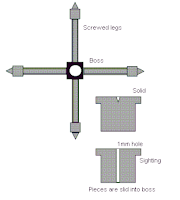 Using the sighting gear in stern frame boss with solid piece fitted. The stern frame boss is marked off for boring . The solid piece is then exchanged for a sighting piece.
A second sighting gear with sighting piece is fitted to the bore hole in the aft peak bulkhead. This is adjusted until the light source can be seen through the boss and aft peak bulkhead sighting pieces. The sighting piece is replaced by the fixed piece and the bulkhead may be machined. The stern tube is scribed out and the p.c.d. of the bolts which will support the stern tube flange marked off. A similar procedure us repeated for other bulkheads. When boring out is completed the stern tube is hauled into position, wood packing being fitted under the flange before bolting up at the aft peak bulkhead, the external stern tube nut is screwed up hard making a rigid connection at the after end. The tail end shaft is now fitted into the stern tube, the flange of the tail end shaft is now the standard by which the remaining line shafting will be aligned.
The trailing block (or towing block), of fitted, sometimes an ordinary plummer block is fitted (bearing material all round) is mow fitted around tail end shaft using feelers and wedging, chocked and bolted sown. The bearing acts also as an auxiliary thrust with a large clearance so that there is no possibility of it taking over from the main thrust under normal conditions other wise the towing block would shear.
This takes the form of a split brass ring fitted to the for'd end of the towing block which allows the tail end shaft to be disconnected from the intermediate shaft and hence rotate freely whilst the ship is under extended towing . The after face of the connecting flange then rides against this brass ring.

Coupling relationship method
The rest of the intermediate shafting is dropped into position on lower half bearings and using tail end flange as a standard they are lined up . This is done by using feelers between the faces of adjoining flanges, wedging the lower half bearings until faces are parallel with a 1/10mm gap between.
A parallel block is used around the periphery of the flanges. The intermediate bearings are chocked up by cast iron chocks about 50mm thick and bolted down. Couplings are continually rechecked. The thrust block is now aligned coupling to coupling and secured.

Main engine alignment
Bedplate and crankshaft now landed on hardwood blocks in approximately the position, slightly lower than true. It is now raised and jacked into position by lining the mating couplings on thrust and crankshaft. Cast iron chock thickness now measured, a small allowance being made to allow for individual fitting after machining. As each chock fitted its corresponding stud bolt is screwed through to engine seating and secured top to bottom. Checks made to ensure that shaft alignment is maintained, interference fit coupling bolts fitted and nuts screwed up.
It should be understood that the lining up of the shaft will only be true for one set of conditions such as on the building stocks or floating in a light condition. During service with variable loading some hogging and sagging takes place but there is sufficient flexibility in the shaft system to take care of this variation. Any bearing which runs chronically hot is almost certainly due to bad initial alignment.

Optical sight line method
This method uses a micro alignment telescope which generates a sight line between an illuminated reflective target at one end of the shafting and the telescope mounted at the other end. The sight line is generated at a uniform height above the shaft vertically above the centreline of the shaft. A movable scale or target is employed on the intermediate shaft at bearing support points to measure distance from shaft to the sight line. The reflective target and movable scale consists of a magnetic 'v'-block fitted with transverse inclinometer and vertical stand with micrometer and scale.

Laser system
Similar to optical arrangement except that a laser housing generates a collimated red laser beam above the shaft which is detected by a centring detector at the other end of the shafting. A moving scale detector is used at intermediate bearing position. 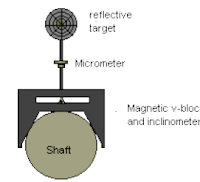 Taut wire method (Pilgrims wire)
Consists of steel wire anchored above shaft at one end of system and led over a pulley with suspended weight at the other end.
The height of the pulley and fixed anchorage are adjusted so that they are the same distance above the shaft and are positioned vertically over the shaft centre line. A microstaff is employed to measure the differences in height at bearing support points between shafts and wire, an allowance being made for wire sag.
A master inclinometer is employed to monitor ships movement during the aligning process. 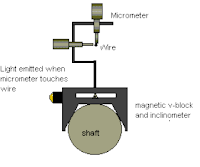 Top cover off and horizontal alignment checked by measuring the side clearances of the shaft within the bearings. By using the system shown the shaft is carefully jacked up and a graph plotted. Initially a curve will be plotted as the ships structure stress relieves itself from the weight of the shafting, shaft still sitting on bearing material.
When curve assumes a straight line shaft has left bearing and in order to avoid damaging the shaft only sufficient plots will be taken to establish the slope of the straight line. The slope of the line for each bearing is put into a computer program which establishes the shaft system characteristic. 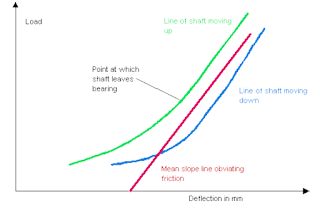 If you have any doubts.Please let me know