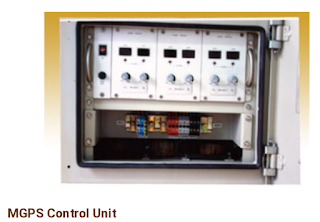 Marine Growth Prevention Systems (MGPS) are used to combat the harmful effects of macro fouling in seawater circuits. The fouling problem arises when barnacles, mussels and other lower forms of marine life as larvae enter pipe-work systems and settle on the internal surface of pipes where they rapidly grow and multiply. In the most extreme cases, complete seawater lines can become blocked, affecting the safety and operational capability of the ship. In other instances, the gradual restriction in the flow of seawater through cooling systems can impair engine efficiency, leading to increased fuel usage. 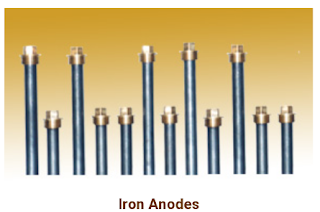 The anti fouling system is based on the electrolytic principle and consists of copper, aluminum and ferrous anodes that are fed with an impressed electrical current from a control panel. The anodes are usually mounted in pairs in the ship's sea chest or strainer where they are in direct contact with the flow of water entering the seawater lines. In operation, the copper anode produces ions, which are transported by the seawater and carried into the pipe-work system and equipment beyond. 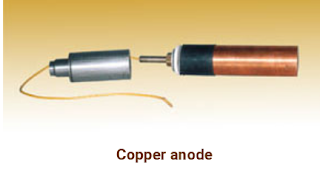 Although the concentrations of copper in solution are extremely small i.e. less than 2 parts per billion they are sufficient to prevent marine life from settling and multiplying. At the same time, the slow dissolution of the aluminum/ferrous anode produces ions, which spread throughout the system and produce an anti corrosive layer on the internal surface of pipes. In this way, the anti-fouling system gives complete and continuous protection to pipe-work, valves and condensers as well as vital firefighting equipment, refrigeration and air conditioning unit. The MGPS Control Panel comes with their motioning arrangement as well to monitor the current impressed.