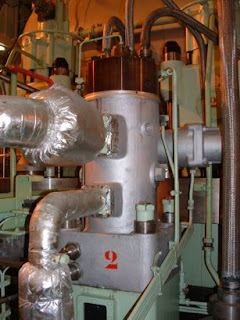 The pump is basically a jerk type with a plunger moving in a matched barrel, using two helical grooves machined in the plunger to control the end of injection by uncovering spill ports and causing the discharge pressure to drop rapidly, thus causing the needle valve in the injector to close. 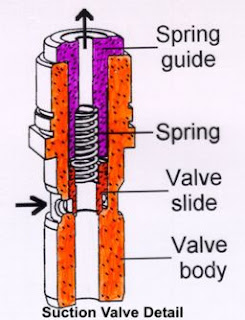 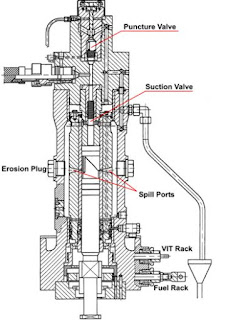 Replaceable erosion plugs  are fitted in the pump housing opposite the spill ports. The high pressure oil, spilling back, as the edge of the helix uncovers the spill ports at the end of injection, hit the plugs, which prevent damage to the pump casing

A puncture valve is fitted in the top cover of the pump. It is opened when compressed air from the control air system acts on top of a piston fitted in the top cover. Fuel oil from the discharge side is then returned to the suction side of the pump and no injection takes place. The puncture valve is operated in the event of actuation of the shut down system (all units), during the air start sequence or when excessive leakage is detected from the double skinned fuel pipe

A spring loaded damper is fitted to the side of the pump connected through to the suction side of the pump. This smoothes out the pressure fluctuations as the high pressure fuel spills back at end of injection

The pump is capable of Variable Injection Timing (VIT). This overcomes the disadvantage of the basic jerk pump, where although the end of injection is infinitely variable, the start of injection is fixed by the position of the spill ports, injection commencing shortly after the ports are covered by the top edge of the plunger.

As well as having the normal fuel quantity control (i.e a rack which rotates the plunger in the barrel), the fuel pump is fitted with an adjustable barrel which has a large pitch thread machined on the bottom. The threaded barrel is located in a threaded sleeve which is rotated by a second rack.  As the sleeve cannot move axially, and the barrel is prevented from rotating, then as the sleeve rotates, the barrel moves up and down, thus altering the position of the spill ports relative to the plunger, and varying the start of injection.

The reason for using VIT is to achieve greater fuel economy. This is achieved by advancing the injection timing so that maximum combustion pressure (pmax) is achieved at about 85% MCR (maximum continuous rating).
The system is set up so that there is no change in injection timing at low loads (40%MCR). This is to avoid frequent changes of pump lead during manoeuvring.

As the engine load is increased above 40%, the start of injection advances. When the engine has reached approximately 85% MCR  at which the engine is designed to have reached pmax, the servos retard the injection timing so that the maximum combustion pressure is kept constant between 85% and 100%MCR.

Variable Injection timing also allows for small adjustments to the fuel pump timing to be made to allow for fuels of varying ignition qualities. Wear on the fuel pumps can also be compensated for as can changes in the camshaft timing due to chain elongation (up to 2 degrees) 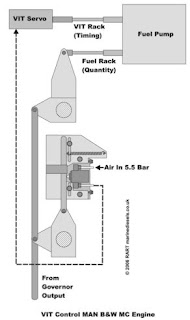 The position of the control valve is adjustable which can be used to allow for fuels of varying ignition qualities and changes in the camshaft timing due to chain elongation. 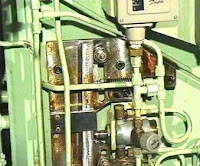 The pivots are also adjustable for initial setting up of the VIT and adjustment of breakpoint position. 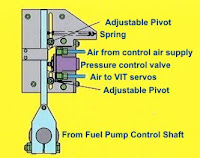 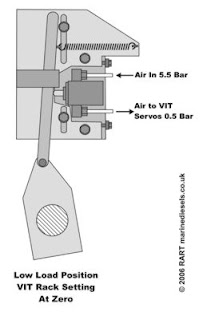 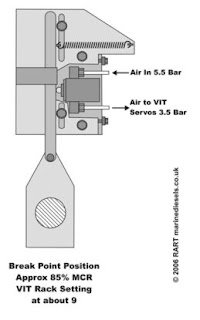 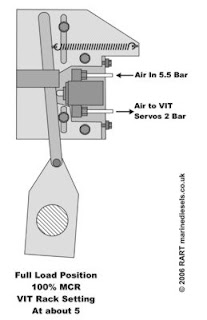 The air signal to the fuel pump VIT actuators which operate the VIT racks is implemented within the electronic governor as an electrical signal between 4 and 20 milliamps. This signal is sent to an IP converter which generates the pneumatic control signal between 0.5 bar (min VIT setting) and 5 bar (Max VIT setting).
The essential difference between the mechanical and electrical system is the use of the breakpoint and how the pressure rise is controlled. With the mechanical system the breakpoint is fixed, with the electrical VIT system the breakpoint is variable depending on the scavenge pressure.

If the scavenge pressure is high, then the resulting compression pressure within the cylinder will be higher: This means that unless adjustments are made, the maximum pressure in the cylinder could rise above the design point. By altering the breakpoint to a lower percentage point of engine load, Pmax is reached earlier and maintained at that point until 100% load.

Similarly, if scavenge pressure is low, then the breakpoint moves closer to 100% engine load, so that Pmax is still reached.
The electronic control is only active when running ahead when the engine is in bridge control or ECR control. When running astern or in local engine side control, the manoeuvring system delivers a preset pressure to the VIT actuators.
Adjustments during running are simpler, as correction values are entered directly into the governor. Change in fuel quality or wear in the fuel pumps may make it necessary to adjust the VIT.
The correct method of doing this is as follows:
Take a set of indicator cards with engine load just above the breakpoint.
Adjust the Pmax by altering the governor Poffset value. (this is the value by which the Pmax can be raised or lowered)
Take a further set of indicator cards to verify adjustments.
In the case of badly worn liners giving poor compression, or excessively worn fuel pumps, it is recommended that the VIT function is disabled in the governor settings.