The animation on the left shows the cam follower just beginning to move up the slope of the cam with the camshaft rotating in anticlockwise direction. (i.e. start of injection)
If the engine direction is reversed at this point, then air will enter the pneumatic cylinder as shown and will move the piston to the right. The cam follower will be moved across and would finish in the position shown which would be at the correct fuel pump timing for running astern.

It should be noted that the reversal of the follower only takes place while the engine is rotating. If the engine had been stopped from running ahead, and then started astern, the fuel pump followers would move across as the engine starts to rotate, and before the fuel is admitted by venting the fuel pump puncture valves 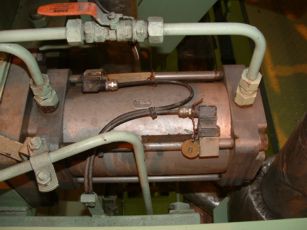 A micro switch shown on the LHS detects whether the follower has moved across. If not, an indicator light is lit in the control room, However the engine will still start if a follower fails to move, perhaps due to corrosion in the servo cylinder. A high exhaust temperature deviation alarm would operate within a short time. Allowing the engine to start in this situation could be useful during manoeuvring in confined waters.

April 08, 2020
Any opening in a pressure vessel is kept to a minimum and for a man entry an elliptical hole  is lesser in size than the corresponding circular hole. More over it is prime concern to have a  smoothed generous radius at the corners to eliminate stress concentration. Hence other  geometrical shapes like rectangle and square are ruled out.  To compensate for the loss of material in the shell due to opening, a doubler ring has to be  provided around the opening. The thickness of the ring depends on the axis length along the  dirrection in which the stresses are maximum and the thickness of the shell. It is important to  align the minor axis along the length of the vessel, as the stress in this direction is  maximum. Longitudinal stress: Pd/2t where P= pressure inside the vessel, d= diameter of the arc, t=  thickness of the shell plating  Circumferential stress: Pd/4t  More over a considerable material and weight saving is achieved as minor is along the  direction of maximum stress.
4 comments
Read more