December 25, 2019
The valve is fitted into the cylinder head. It is opened by control air from the starting air distributor.
The valve shown is from a slow speed MAN-B&W two stroke engine but a lot of modern engines have valves working on similar principles and design.

Materials
The body of the valve could be of mild steel, the spindle of high tensile or stainless steel, and the valve and seat could have the contact faces stellited or hardened. 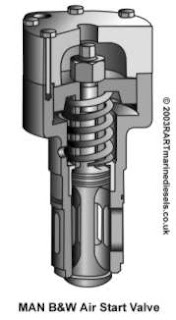 How it works
Main starting air at about 30 bar from the manifold enters the chamber above the valve via the circumferential ports in the valve body.
The air pressure will not open the valve because a spring is holding the valve shut, an the area of the balance piston is the same as that of the valve lid so the valve is pneumatically balanced.
When the valve is required to open, air at 30 bar from the air start distributor enters the the top of the valve body and acts on a piston. This force overcomes the spring force holding the valve shut, and the valve opens. When the air signal from the air start distributor is vented, the spring closes the valve
When the start sequence is finished the main air start pressure is vented through holes in the main start air manifold.

The Sulzer air start valve uses air on both sides of the operating piston to maintain positive closing. The piston is stepped. The reason for this is so the starting air valve will not open when the gas pressure in the cylinder is higher than the starting air pressure; i.e. when the cylinder is firing. Once the valve starts to open then the opening is accelerated when the larger diameter piston has the opening air acting on it
The stepped piston also means that closing of the valve is damped as air gets trapped in the annular space formed when the smaller diameter piston enters the upper part of the cylinder.
The air to operate the valve comes from the main air start supply. The distributor pilot air operates the pneumatic change over valve.

MAINTENANCE
After certain periods of service starting air valves are changed and overhauled. If piston rings are fitted, care must be taken to ensure that they are free in their grooves. Should it be necessary to fit new rings, the butt clearances of the rings must be carefully checked by placing the ring into the operating cylinder and measuring the clearance. This is especially important if they are usually made of brass which has a larger coefficient of expansion than the other parts of the valve. The valve and valve seat are ground with grinding paste and finished to a fine surface with lapping paste. It is essential to ensure that all parts of the valve are scrupulously clean before reassembly. Lubricate all sliding surfaces sparingly with a molybdenum disulphide grease.

HOW DOES THE STARTING AIR BRAKE THE ENGINE WHEN CHANGING DIRECTION?
If the engine is required to reverse whilst there is still way on the ship, the engine will be driven by the propeller, and it may be a while before it comes to a halt, and is thus able to start in the reverse direction.. To speed up the process, starting air is admitted whilst the engine is still running ahead although the start air distributor will have been retimed to admit air for reverse running.
Because of this, starting air flows into the cylinder half way up the compression stroke. Towards the end of the compression stroke (no ignition, fuel injection cut off by the running direction cut-out), compressed air, (at a pressure which has increased above that of the starting air), then flows through the starting air valve, which is still being held open, into the starting air distribution pipe. If the starting air valve is then closed, there will be less air within the cylinder than at the beginning. In this way, considerably less expansion work is done than for compression, i.e. the engine is braked. The engine will come to a standstill and then start to turn in the opposite direction, since the control elements are set for this.

WHAT SHOULD I DO IF AN AIR START VALVE JAMS OPEN WHILST MANOEUVRING?
The fuel pump should be lifted (fuel rack zeroed, puncture valve operated or whatever) on the affected unit and the bridge informed. The load should be kept at a minimum, as one unit is now out of operation. As soon as safe to do so, the engine should be stopped and the air start valve replaced.