Slow steaming has become more of  a normal operating procedure due to the following factors:

The worldwide downturn in the global economy leading to reduced demand for manufactured goods. This has led to reduced capacity demand. Shipowners are reluctant to lay up vessels and there are also  a large number of new ships being delivered.

The simplest way to reduce operating costs is to reduce the fuel bill. Most vessels are propelled by a slow speed two stroke engine directly coupled to a fixed pitch propeller. If the speed of the engine is reduced, then although the vessel will slow down, the amount of fuel required to travel each nautical mile is reduced. This is because the correlation between speed and shaft power is not linear, but cubic. (PaV3D2/3)

For example, reducing the ship speed by about 20% will reduce the engine power to 45% of its nominal output. This will result in a reduction in the fuel burnt per hour by about 60%.  Reduce the speed by 33% and the fuel saving could be 75% . Of course the voyage will take longer and so the actual fuel saving will be up to about 60%

A two stroke engine operates  at its optimum overall efficiency at about 80% load. When the engine is designed, the auxiliary and ancillary systems are optimised for the engine running at between 70 -85% load. If the load drops below 60% then other problems will begin to show which will interfere with engine performance and operation: These are outlined below. 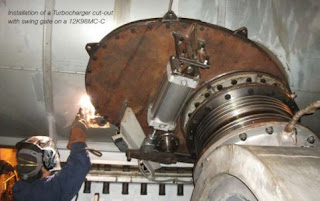 Fouling of exhaust systems and  turbochargers due to poor fuel injection, atomisation and combustion. This is more relevant to the camshaft engines where the fuel pump is driven by a cam. The slower the engine runs, the slower the fuel pump plunger moves to deliver fuel to the injector. Electronic engines with various forms of camshaftless fuel injection are better at coping with this, and engines fitted with slide injection valves reduce the quantity the unburnt fuel from the sac  of the injector nozzle from entering the cylinder and causing fouling and poor emissions. Decreasing the viscosity of the fuel to about 13cSt at the nozzles will also improve combustion at low loads.

Cold corrosion caused by condensation of sulphuric acid on the liner surface and in the exhaust gas heat exchangers. This can be combated to some degree by raising the cooling water temperature to give an outlet of around 90°C and maintaining the Air cooler inlet temperature at about 35°C to keep scavenge temperatures at an optimum. Sulzer maintain that exhaust temperatures must be kept above 250°C to prevent cold corrosion in the uptakes and in the exhaust gas economiser. 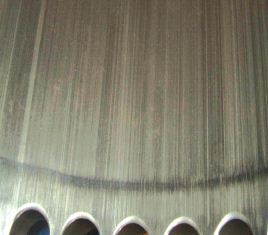 Excess cylinder oil fouling and gumming up ring grooves leading to sticking piston rings. Also fouling of the turbocharger nozzle ring and turbine blades. Unburnt cylinder oil can build up in the exhaust manifold leading to a danger of an exhaust manifold fire and uncontrolled overspeed and subsequent failure of the turbocharger. It is recommended that when slow steaming, the engine load is increased to full power for at least 30 minutes daily, or at a minimum of 1hour twice weekly to help burn off these deposits. Engines fitted with either the MAN Alpha lubrication system or the Sulzer pulse lubrication system which both use computers and crank angle sensors to deliver the oil between the ring pack are better at providing adequate lubrication for low load running. 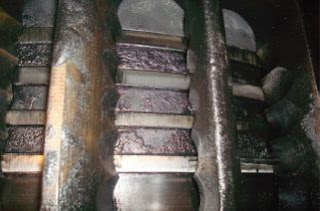 Excessive liner wear due to slower piston speeds. This is partly linked to the cylinder lubrication. If this is reduced by too much to combat the effects described above, then the rings will not build up an oil film between ring and liner. But overall lower piston speeds will reduce the effective hydrodynamic film that build up between ring and liner.