The crosshead on a slow speed 2 stroke is a difficult bearing to lubricate effectively. The load is continually downward and because the con rod swings about the pin, changing direction each stroke, true hydrodynamic lubrication cannot take place. Instead the lubrication starts as boundary, and as the rubbing speed increases, a hydrodynamic film is built up. As the rubbing speed decreases the lubrication becomes boundary once again.

As engine powers and thus gas loads have increased, the difficulties with achieving effective lubrication have increased. Larger pin diameters have helped by increasing the linear rubbing speeds, and the continuous lower bearing has reduced the loading/unit area. 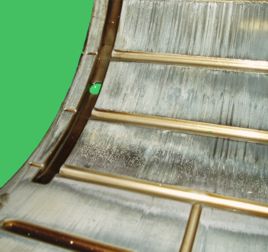 The older forked type crosshead as found in earlier engines (up to the mid 1980s) used various methods to improve the lubrication of the crosshead. Oil grooves in the lower bearings were used to distribute the oil. The grooves in some cases extended to the edge of the bearing, although with a reduced csa, to ensure a flow of oil through the bearing.
THE MAN B&W MC ENGINE CROSSHEAD 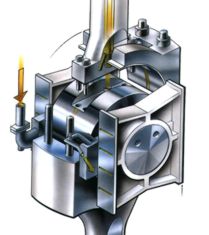 The lower  bearing shell (tin aluminium with overlay) has oil grooves with machined wedges as shown in the diagram and photo. The oil enters via the cut out channel in the centre. The grooves extend right to the edges of the bearing to ensure a flow of oil, thus cooling the bearing. 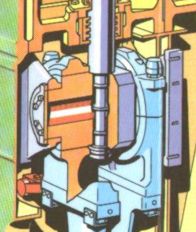 The early RTA had a forked crosshead with the piston rod passing through a hole in the crosshead pin and secured underneath with a nut. Oil entered the bearing through holes in the shell. via a groove machined in the the lower bearing housing 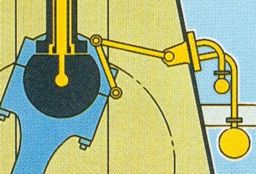 A Question sometimes asked is why do Sulzer need to boost their crosshead oil supply pressure to 12 bar whilst MAN B&W supply oil to their crosshead at system pressure. The answer lies in the design of the bearing.

More than 90% of the circulated oil has the sole purpose of cooling the bearings. If you study antique machines with open crankcases, you will see that the amount of oil for lubrication is a few drops per minute. This is enough for maintaining the oil film in the bearing and with an open crankcase the friction heat is removed by air-cooling. Modern engines have closed crankcases and a much higher bearing load - hence the need for oil cooling.

A crosshead bearing is only oscillating and the lower shell is always loaded. The cooling oil must be injected between shaft (crosshead pin) and lower bearing.

In MAN B&W engines, a set of channels have been machined in the lower crosshead bearing, in which the cooling oil can pass. The geometry is designed in such a way that all the loaded square centimetres of the pin are flushed with cooling oil twice every engine cycle. In contrast, the Sulzer crosshead has a plain lower bearing without channels. In order to inject oil between pin and bearing, they have to supply oil at a much higher pressure. The injection will take place at around 20 degrees crank angle before TDC, where the cylinder pressure is still low and upward inertia forces on piston is still high. There is a short interval, in which the bearing pressure is lower than the oil pressure.