July 01, 2020
Three vertical parallel forces acting on the ship:
The upthrust force (P) can be considered to have an effect similar to that of removal of a weight from the ship. This has the virtual effect of rising the center of gravity of the ship from the point ‘G’ to ‘G1’. The metacentric height therefore reduces from GM to G1 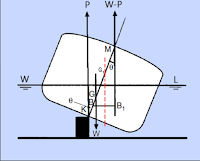 H            Virtual rise in CG during dry docking.
The virtual reduction in metacentric height at any stage of the docking process can be calculated by the following expression: